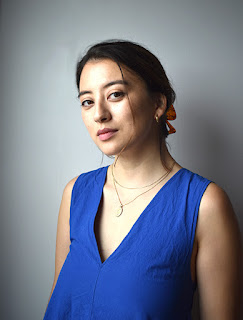 Nina Li Coomes is a Japanese and American writer. She was born in Nagoya, and currently resides in Chicago, where she is a student at the Litowitz MFA & MA in nonfiction.  Her writing has appeared in The Atlantic, Guernica  and Catapult, among other places. In 2018 she was an Aspen Summer Words Fellow in Memoir, in 2019 a Tin House Scholar, and in 2022 was awarded a residency at Hedgebrook.  Her work has been nominated for a Pushcart Prize, a Chicago Review of Books Award, and was listed as a Notable Mention in Best American Travel Writing 2020.  She is a film reviewer and regular contributor at the Chicago READER.  She is represented by Annie Hwang at Ayesha Pande Literary.
Previously, she worked as a television news producer for a major Japanese news network, as well as a research assistant at the Program on U.S.-Japan Relations at Harvard University.  In 2016, she helped to produce「もし、あなたの家族が…〜日本の移植医療に未来はあるのか〜」, an award-winning documentary about pediatric organ transplant policy between the U.S. and Japan.  Currently, she works with clients across the globe, assisting with translation and localization services in English and Japanese.